It is SOOO good to be talking books again. I skipped my monthly reads post at the beginning of April because I had only finished two books, so it wasn't much of a post. But I read A LOT in April and have lots to discuss today. All links are affiliate links.

These Is My Words: This book has been on my reading list for more than a year and I am SO glad I finally read it. Set in the Arizona Territories during the turn of the 20th century, I found it fascinating reading about living during that time. It is a period and part of the country I have read very little about. Though it was a bit slow for me at first, it picked up about 50 pages in and I ended up loving it. Though I wouldn't give it 5-stars, I do believe it is a historical fiction book I will be sharing with others for awhile.
4 stars

The Sound of Gravel: If you regularly read best book lists, then you likely have heard about The Sound of Gravel. It was everywhere at the end of last year and I added it to a recent Book of the Month box (I love that you can add on books for $9.99). After finishing These Is My Words, I wanted to read something very different and this memoir about a girl who grew up in a polygimist cult fit the bill. Her story is astonishing. I could not put it down.
5 stars

America's First Daughter: This was my bi-monthly book club's selection. I have had the book on my kindle for a long time, but ended up picking up a physical copy at my local used book store. Because of its length (nearly 600 pages) I'll liked seeing my progress -ha! I love historical fiction and was looking forward to reading this book about Thomas Jefferson's daughter, based on hundreds of letters she and others wrote over the course of her life. I was disappointed that I did not love the book. I found it hard to get into, and then when I did get into it, I still found parts dragged on and on. It certainly was interesting reading about that period in American history, but this book just wasn't my cup of tea.
3.5 stars

The Gilded Hour: This book was recommended to me as a good and long audio book. I started it in February and finished it at the beginning of April – it was more than 33 hours! It is an epic story about two female doctors in the late 1800s. It has love, murder and mystery in it. I found it fascinating, particularly because part of the storyline dealt with contraception being illegal during that period and the physicians seeing women in dire circumstances who kept getting pregnant and could do nothing. Toward the end, I couldn't listen fast enough and ended up going to the library to get the book so I could finish it. All the storylines ended neatly except one major one, which frustrated me. I understand that the author is working on a sequel, but when you read 700+ pages, you want to know all the things. After reading The Gilded Hour, I bought Into the Wilderness by the same author because I liked her style so much.
4 stars

The Whiskey Sea: I bought this book as a audible deal and really enjoyed it (it's on sale right now for $1.99). It was all about a female boat runner who brought whiskey and other alcohol by boat into the US during prohibition. I have not read much about prohibition and found the story fascinating. The writing and characters weren't super deep or rich, but I still found the story enjoyable and satisfying.
4 stars

The Twilight Wife: I borrowed this book from the library after seeing it on several reading recommendation lists. It seemed like a good thriller that I would enjoy. I devoured it on a trip to Utah. It definitely kept me guessing and was an easy read. I like the twist at the end. While I've certainly read better thrillers, it was still good.
4 stars

The Hate You Give: This book is such an important read give the current events in America. I listened to it on audible and found the performance to be excellent. The Hate You Give is about a 16-year-old named Starr Carter, who struggles to balance the life she lives in her poor neighborhood and the fancy suburban prep school she attends. When she witnesses the fatal murder of her childhood best friend Khalil (who was unarmed) by a police officer, her life unravels. This book is raw, shocking and a must-read.
5 stars 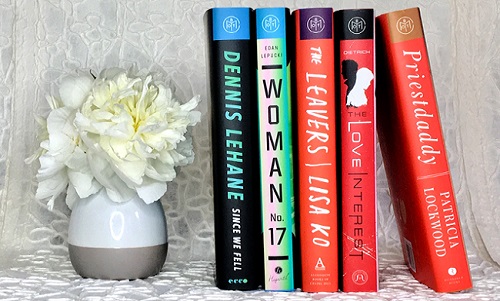 I'm REALLY excited about this month's Book of the Month selects. My choice was The Leavers, but everything title looks excellent. If you have never joined Book of the Month, this is the month to try it out because the deal they are offering is spectacular.

Get three months for $9.99 a month + a free copy of Into the Water, which is the new book by Girl on the Train author Paula Hawkins. That's four hardback new releases for less than $30 – shipped! Use coupon code WATER to get your free book added to your first month.

What have you been reading this spring?

Previous article: What do you want to be better at?
Next article: A Sesame Street Birthday Party for Ezra