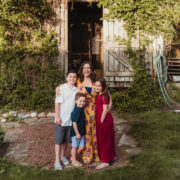 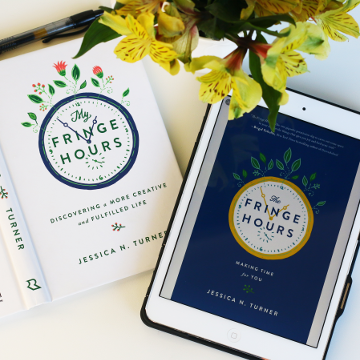 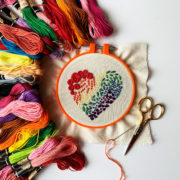 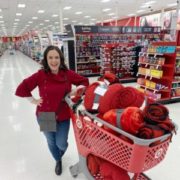 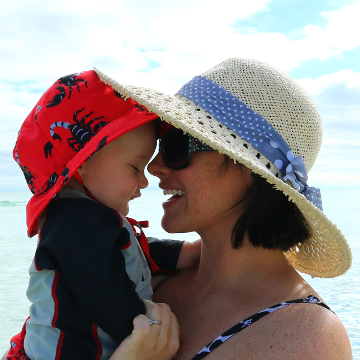 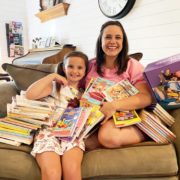 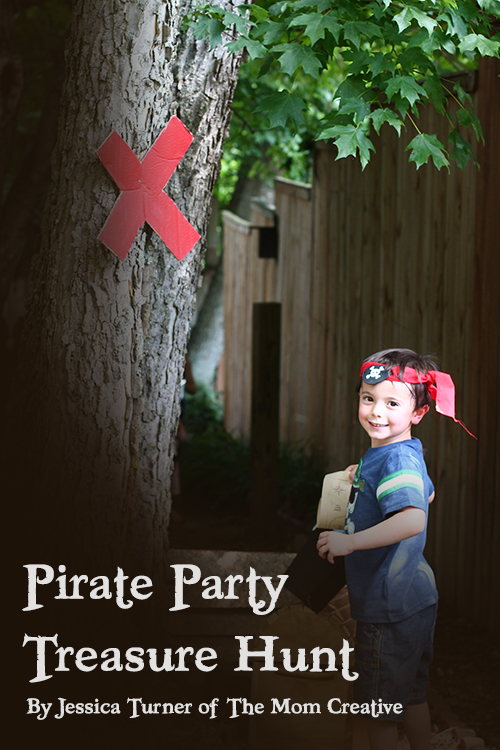 Obviously for a pirate birthday party, a treasure hunt was a must. I had a hard time finding a lot of detailed examples of successful treasure hunts for little kids, so it's my hope that this might help some of you!

The treasure hunt was the element of the pirate party that felt the most overwhelming to me, but actually it was rather easy. The lesson I learned is this: 5-year-olds aren't going to really get complex clues, so don't make it harder than it has to be. I have included the clues in this post. Please feel free to use them for your own pirate party.

NOTE: Some of the clues I wrote on my own and some were adopted from this pirate party (which is a must-see! SO many great ideas.) 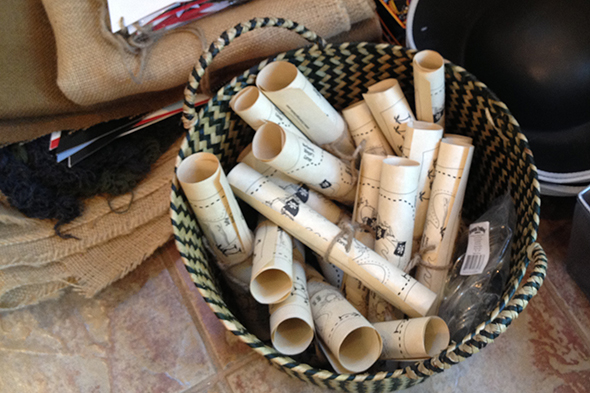 I found a treasure map online that I used as a template for our pirate treasure hunt. I printed the maps on parchment paper, rolled them up and tied them with rope. (The only picture I got of them was the above prep picture.)

For each spot for the treasure hunt, I painted a sign on cardboard, wrote a clue and had something for the kids to “find”. 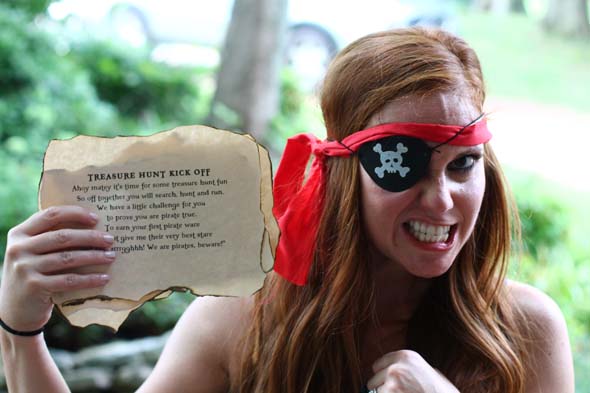 I printed the treasure hunt clues on parchment paper and had fun burning the edges for an added effect. 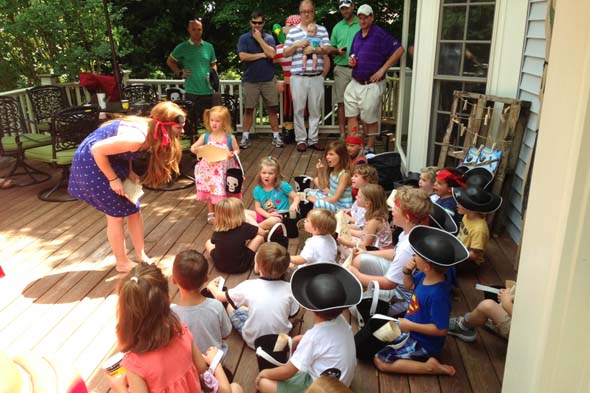 We started the treasure hunt by having everyone sit down and listen to Captain Angie, my best friend and Elias's godmother. Everyone received a pirate bucket (Halloween candy buckets that I bought on clearance) and a treasure map. Rather than do party favors at the end of the party, the kids found their favors on the treasure hunt and had the bucket to put everything in – perfect! The kids were so excited to receive their supplies for the hunt.

TREASURE HUNT KICK OFF
Ahoy matey it’s time for some treasure hunt fun
So off together you will search, hunt and run.
We have a little challenge for you
to prove you are pirate true.
To earn your first pirate ware
all must give me their very best stare
and say “arrrgghhh! We are pirates, beware!”

The kids were so adorable yelling “arrrgghhh! We are pirates, beware!” I wish we had gotten it on video! 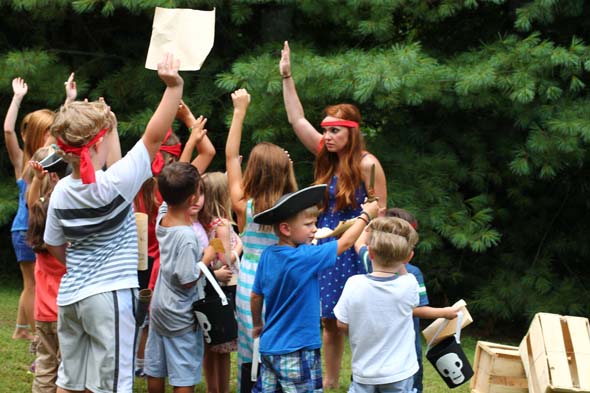 They then followed Captain Angie to the first spot on the treasure map- Stinger's Corner. 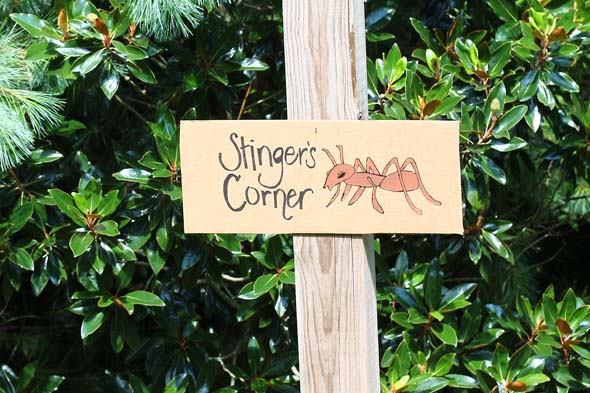 In Stinger's Corner I had two crates, which I got for free at the grocery store (they were used to ship corn) piled on top of each other. I then had tattoos scattered on the ground beneath them. Every child got one pack of tattoos. 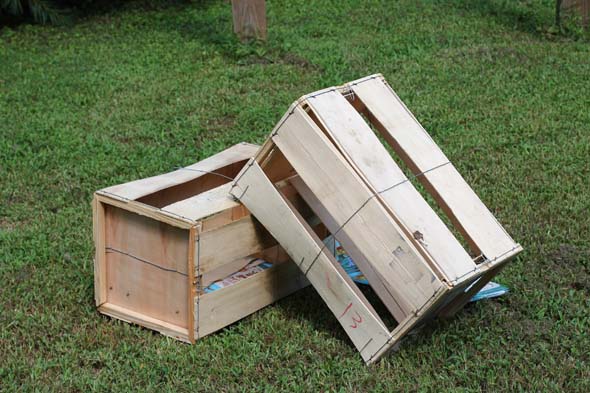 STINGERS CORNER CLUE
Open your ears and listen up
You don’t want to become someone’s sup.
Here’s the very first clue for you:
In stingers corner you’ll find tattoos!
Be sure to look carefully and only take one.
After the treasure hunt we’ll put them on for some fun! 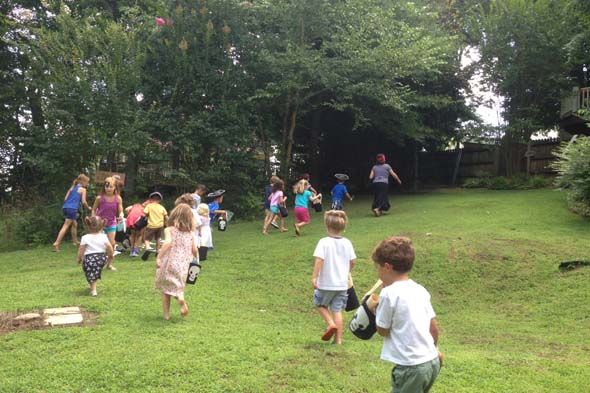 They then went to the next spot on the treasure map, the Boney Badlands. 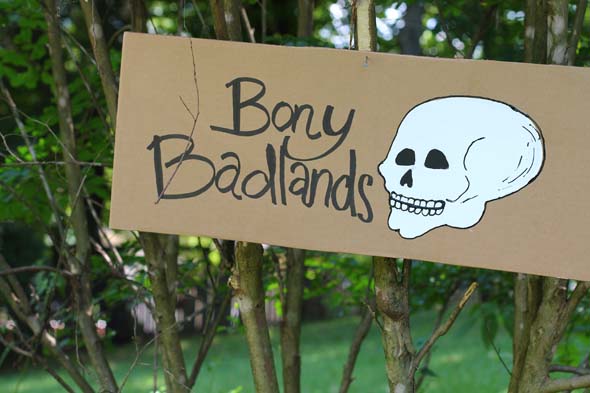 I painted a bunch of big bones and scattered them in the lawn. Beneath the bones were gold dubloons. 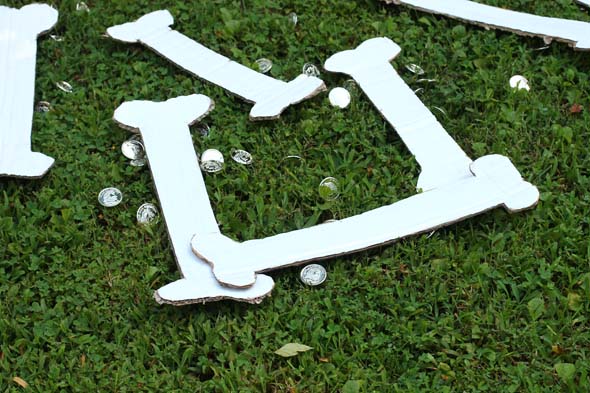 (The bones were a HUGE pain to cut out. In the process, I wished I had just bought white poster board to make the bones. It would have been MUCH easier.)

BONEY BADLANDS CLUE
The badlands aren’t just covered with bones
So don’t be scared and grab Pirate Jones.
Look all around and soon you’ll see gold
Be quick and grab two pieces to hold. 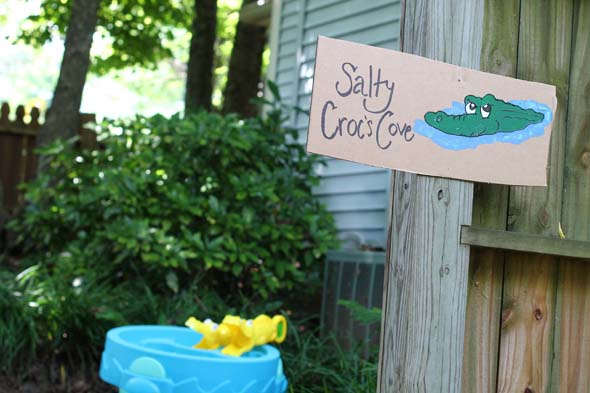 The next stop on the treasure map was Salty Croc's Cove.

This one took me awhile to think of. At first, I thought about getting a blow-up pool croc to put in the yard, but they were pricey for a 2 minute pirate adventure.

Then I stumbled on these yellow croc choppers at Walgreens. They were meant to be used to dig in the sand, but I had a better idea. 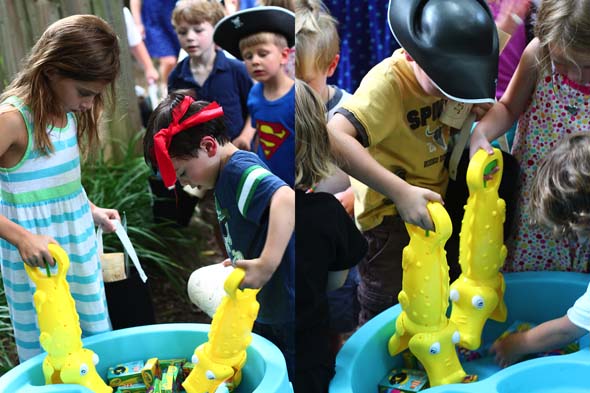 I filled up our water table with little puzzle boxes that I bought on clearance in the Target One Spot. The kids then used the crocs to get the puzzles out of the “lake.” The kids loved it!

SALTY CROC’S COVE CLUE
It’s Salty Croc’s Cove you must now get through
But the reward is a special gift for you.
The crocs teeth are super sharp, so beware
You must grab their tails with very great care.
Just use their mouths to get your treat from the lake
And at home, an awesome puzzle you’ll make!

For the last spot on the treasure hunt, we nailed a big red X to a tree. We had a gold wood chest that we used for cards at our wedding. I filled it up with little helicopter toys for the kids (also bought on clearance at Target). They were SO excited and spent much of the party playing with them all over the deck and yard.

X MARKS THE SPOT
Tis was stormy night on the sea
Me treasure is safe, but not me.
You found it friend, and you’ve reached the end
A clever young mate ye must be! 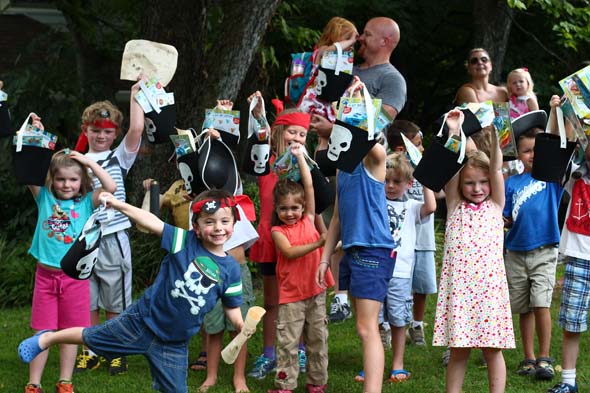 Before going in for pizza and cake, we attempted a group treasure hunt photo. Fun was had by all.

I hope this helps you if you ever have to plan a pirate treasure hunt!

Note: To read about the pirate party in full, click here.