On Saturday, we celebrated Elias turning two with an Elmo birthday party at a local park, and it was a huge success! (Some links in this post are affiliate links.) 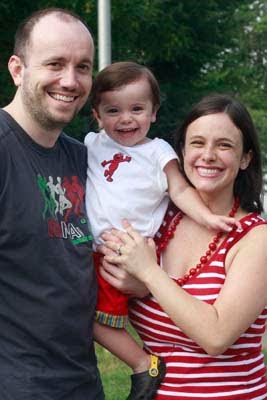 Just a warning, this is a long and photo heavy post, but I am hoping it will help some people who may want to plan an Elmo birthday party someday! 🙂

The Invite
It all started with this Elmo birthday invite from Photo Card Creations. 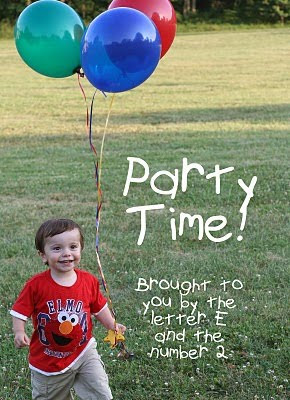 Him in an Elmo t-shirt combined with the “brought to you by the letter E and the number 2” copy was the perfect way to present the Elmo theme. Plus, so many options are out there for cute photo invites. I love using photos on invites because they document Elias's age in a memorable way! I created the card in photoshop.

to the park, and I tied a sign to his neck welcoming the party guests. (This Elmo isn't available any more, but any Elmo toy would work, such as the Tickle Me Elmo 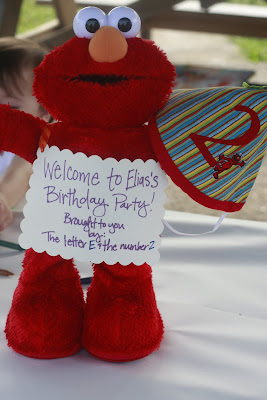 I also bought this giant Elmo on Ebay, thinking he would be a fun photo opp, but the kids were too distracted by everything else at the party. 🙂 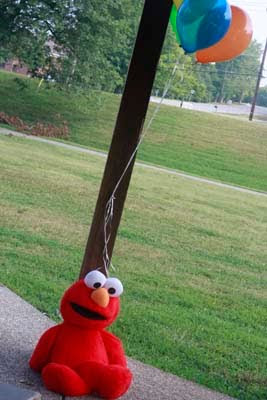 Elias's Elmo Gear
Elias's Aunt Angie made him a special birthday outfit. She made the hat using a pattern from Frog Legs and Pony Tails and then made coordinating shorts. I ordered iron-on Elmo patches from ebay (from a vendor in Korea), and added them to the hat and the little white muscle tee. 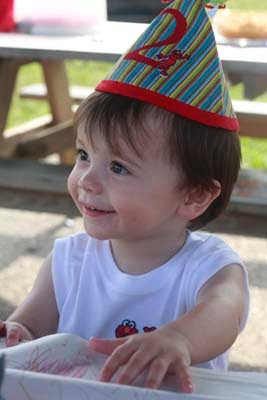 Sesame Street Paper Products
I found everything at the Dollar Store! The clerk told me that they don't usually have the Sesame Street line, so I think I lucked out. 🙂 Since the party was at a park, I used Elmo baskets to keep everything from blowing away. You can find similar Sesame Street paper products here. 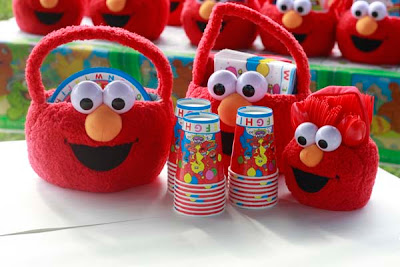 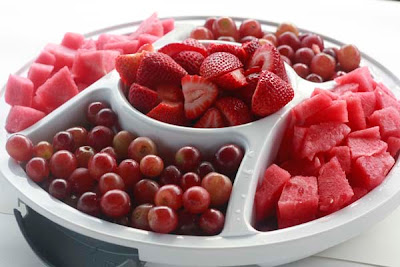 A big bowl of goldfish crackers (ala Dorothy, Elmo's fish) 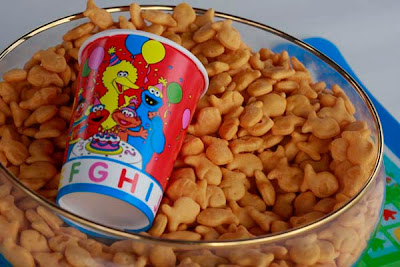 Water,  milk and juice boxes (no picture, but I covered cheap foam coolers with Elmo decor. They were really cute).

And, of course, an Elmo birthday cake (made with an Elmo Cake Pan 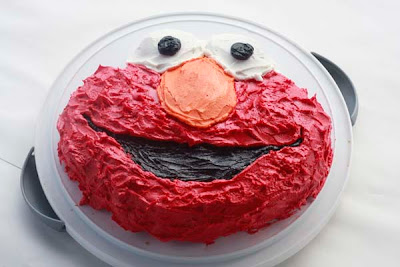 Elias LOVED the cake and kept saying “Elmo cake! Elmo cake!” After everyone sang happy birthday, he clapped and cheered. It was SOOO cute. 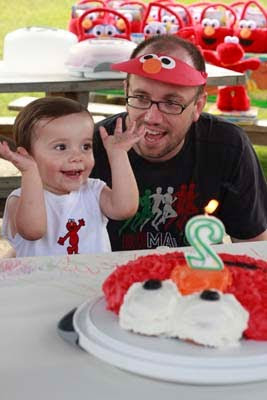 A couple details about making this cake: I made two batches of Wilton buttercream frosting- one for the red fur and one for everything else. I also used an entire container of Wilton red no tastecoloring to make the red fur. When I was making it, I was concerned that the red was not red enough, but the red actually gets darker, so it worked out fine. 🙂 And clearly, the kids enjoyed it! 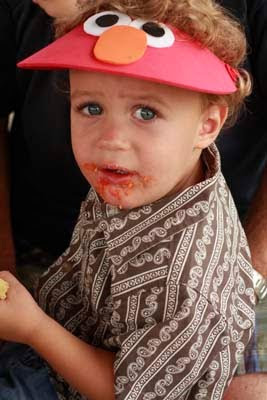 Elmo Gift Baskets and Elmo Visors
We had a special picnic table, covered in a Sesame Street tablecloth

for the Elmo gift baskets and Elmo visors. 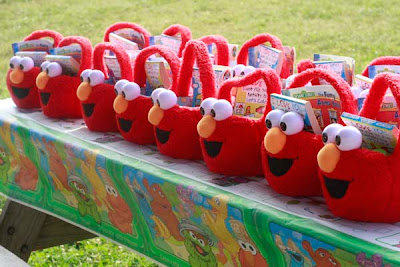 Pin It
I found Elmo baskets 90% off at Target after Easter. (They had bunny ears on them, but I cut them off.) I went to three Targets to gather up enough for Elias's party. (They have these Elmo baskets every year at Target.) In each basket was a coloring book, two Elmo Sesame Street books, and bubbles. Target's Dollar Spot often has Sesame Street items, so if you are thinking of having an Elmo birthday party, I recommend scouring this area. I bought all the items 75% off several months ago – planning ahead helps! 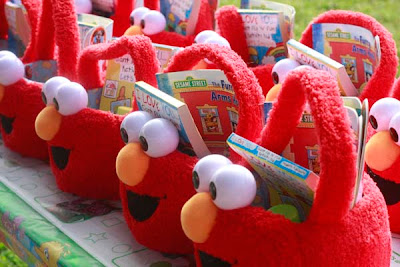 When I saw this design for Abby visors, I just had to make Elmo visors instead of giving out regular birthday hats! They are made of colored foam and I cut everything freehand (as you can probably tell!). I found Aileens Tacky glue to work great on the foam. They were a big hit! 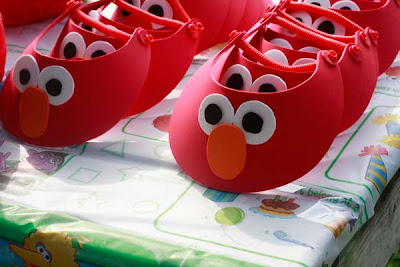 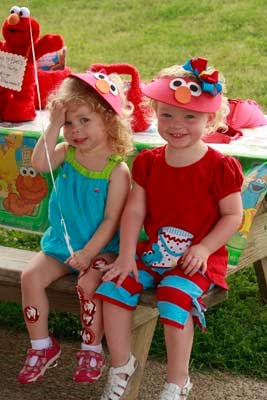 Balloons I love balloons at birthday parties, so we used a Balloon Time helium tank

to fill lots of brightly colored balloons and tied them to the outside of the picnic area. It was so festive and inviting. 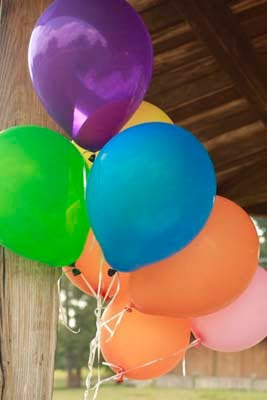 The kids LOVED blowing up the balloons and carrying them around the park. A few got let go into the clouds, which created much excitement amongst the two year olds. I will definitely get one of these tanks again! (Check out my review about this product.) 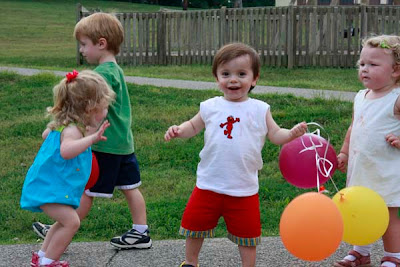 Elmo Fun The tables were covered with white paper so the kids could draw on them. I had several red tins filled with crayons. I also had a basket of Elmo board books for the kids to look at. 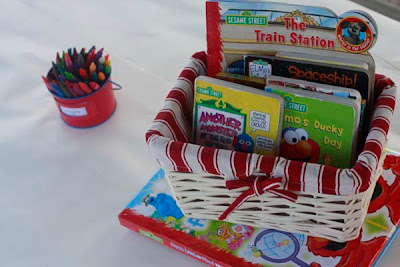 , so we set that up and the kids had fun going in and out of it. 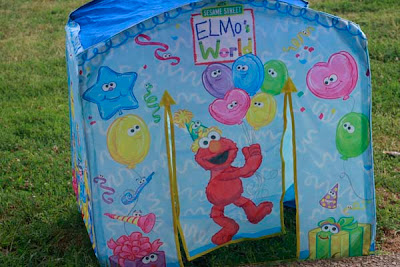 Of course, being at a park meant lots of swinging and running around. 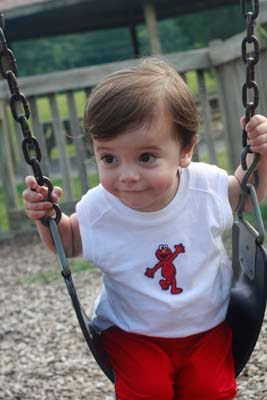 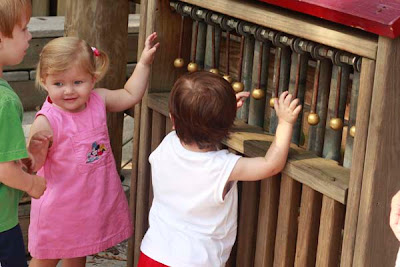 We had the party at 9 am, which worked out great. The kids were all really happy and it wasn't too terribly hot. All in all it was a really fun party!