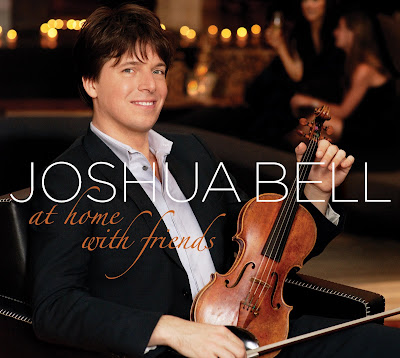 Today I am so excited to be giving away a copy of the new Joshua Bell album, At Home with Friends. I was not familiar with Joshua prior to receiving this album, and all I can say is wow. I have been missing out.

Joshua is a ridiculously talented violinist.

Seriously. Even if you don't like classical, I don't know how you couldn't enjoy his music.

I have really enjoyed listening to At Home with Friends all week while working. I find myself humming along with his strings and just being really relaxed, which is something I have needed lately. At Home with Friends is a duet album with some incredible artists including Sting and Regina Spector.

What I find craziest about Joshua's talent is that he is so young! He was discovered at age 14 and is now in his early thirties. If you like Josh Groban, I think you will really dig this album (and Josh and Joshua do a duet on it!).

If you are interested (and can stay awake!) Joshua is going to be on The Tonight Show with Conan O'Brien tomorrow night.

To win a copy of the album, just leave a comment! Easy-peasy.

I will post the winner on Sunday! Good luck!

Updated: I just did a YouTube search of Joshua and realized he is the violinist in this Washington Times experiment of would people stop and listen to one of the world's greatest violinists? Turns out I HAVE seen him before… and you probably have to. Remember this?