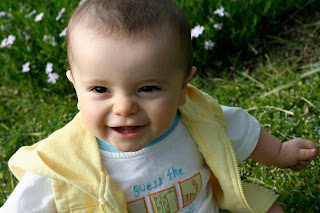 Well, after renting the Canon f1.4 50 mm lens, I simply could not wait any longer to have a fixed portrait lens. I listened to many of you and in early March was able to use some savings to buy the less expensive Canon EF 50mm f/1.8 Lens

and was not disappointed. It takes much better pictures in low-light without a flash. We were still getting used to the fixed length, but were incredibly pleased with the results.

Why am I using past tense? Well because I had the lens for two weeks before

Matthew and I went out to take some pictures and after we finished, I put the camera in the bottom of the stroller (I had left my camera bag in the car).

Matthew was putting Elias in his carseat and I decided to be helpful and collapse the stroller. And with one swift movement, I collapsed it – while my camera was still in the bottom. It crashed to the ground and the lens broke in half.

Thankfully, my camera was okay, but I bawled. The lens was beyond repair.

I immediately started saving swagbucks and within a few weeks earned enough to offset purchasing a new lens – again.

It arrived this week and I have been shooting like a mad-woman. And it has been in the 80s for days, making it perfect to take outdoors shots – my favorites. Can you see Elias's little teeth in the shot at the beginning of the post?He is getting so big!

Previous article: Yes, I Went to a Yanni Concert
Next article: Daddy Dressed Him